That’s how winning is done! 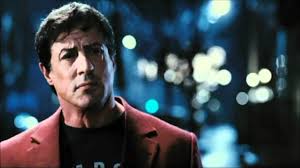 This scene from Rocky Balboa gets me every time. Every. Single. Time.

Heck, I even have a lump in my throat and tears in my eyes as I proof-read this post!

Yes, I know it’s a movie, and sure, the words are explicitly intended to create a sense of drama and elicit an emotional response from the audience. But there are quite literally thousands (millions?) of movies, books and theatrical works that try to achieve the same result and fail. Of course, one’s reaction to any given dialog or scene is a deeply personal experience. But why is it then, that this speech from Balboa to his son stirs so much emotion in me?

As a father to a son who just turned twenty years old in January, the opening sentiment that Balboa expresses in this scene is likely shared by every father on the planet. Having a son–or daughter–is truly a privilege, a privilege we seldom take the time to acknowledge. To see such love and hope for one’s son expressed so sincerely is always going to push my buttons.

Balboa then goes on to talk of his son going out into the world to be his own man. And of course, in the same way that being a teenager is often hard, forging a path as a young adult is also hard and is inevitably beset with many challenges, successes and of course, failures. When we see our children suffer, we hurt. When we see our children undermined, put down, dismissed… we hurt. When we see that they are lost and don’t know where to look for answers, we hurt. At this point, I am hurting.

Take it up to DEFCON 3

The next parts of his speech are for everyone; there is likely not a soul on Earth that would disagree with Balboa’s brief but accurate assessment that the world is definitely not all sunshine and roses. It will beat on you. It will eventually knock you down. And for some, once you are down, it’s often hard to get-up. And this is where I’m welling-up. You see, I am not much of an advocate for “motivation”, and I certainly don’t expect a helping hand when things get tough. When things get tough, I double-down. I fight. I keep pushing forward. That’s how winning is done!

This is serious, go to DEFCON 2

As the speech draws to a close, I am flat out crying. And not that sorry, self-pitying type of crying either; it’s the kind of crying I associate with gut-wrenching emotion. That wave of realization that you can do better, BE better. This part of the speech grabs me by the shirt, pulls me close and literally yells in my face “Stop blaming everyone and everything for your troubles. Fight for what you want, it’s on YOU!”

No point in adding my own words to this next part; Balboa says all that needs to be said: “I’m always gonna love you no matter what. No matter what happens. You’re my son and you’re my blood. You’re the best thing in my life. But until you start believing in yourself, you ain’t gonna have a life.”

Closing thoughts: There are lessons in this speech, or at the very least, reminders of things we likely already know. Life is full of hardships and there will be ups and downs. But no matter how hard things get, there is always a way forward. And that way forward lies within each of us. We simply need to believe in ourselves and have the courage and tenacity to fight for what we want. Your success is on you!

Balboa’s full speech in case you don’t have access to video or want to read it over and over, word for word!

You ain’t gonna believe this, but you used to fit right here. [Rocky gestures to the palm of his hand]

I’d hold you up to say to your mother, “This kid’s gonna be the best kid in the world. This kid’s gonna be somebody better than anybody I ever knew.” And you grew up good and wonderful. It was great just watchin’ you, every day was like a privilege. Then the time comes for you to be your own man and take on the world, and you did. But somewhere along the line, you changed. You stopped being you. You let people stick a finger in your face and tell you you’re no good. And when things got hard, you started lookin’ for something to blame, like a big shadow.

Let me tell you something you already know.The world ain’t all sunshine and rainbows. It’s a very mean and nasty place, and I don’t care how tough you are, it will beat you to your knees and keep you there permanently if you let it. You, me, or nobody is gonna hit as hard as life. But it ain’t about how hard you hit, it’s about how hard you can get hit and keep moving forward. How much you can take and keep moving forward. That’s how winning is done!

Now if you know what you’re worth, then go out and get what you’re worth! But you gotta be willing to take the hits. And not pointing fingers saying you ain’t where you wanna be because of him, or her, or anybody! Cowards do that and that ain’t you! You’re better than that!

I’m always gonna love you no matter what. No matter what happens. You’re my son and you’re my blood. You’re the best thing in my life. But until you start believing in yourself, you ain’t gonna have a life.